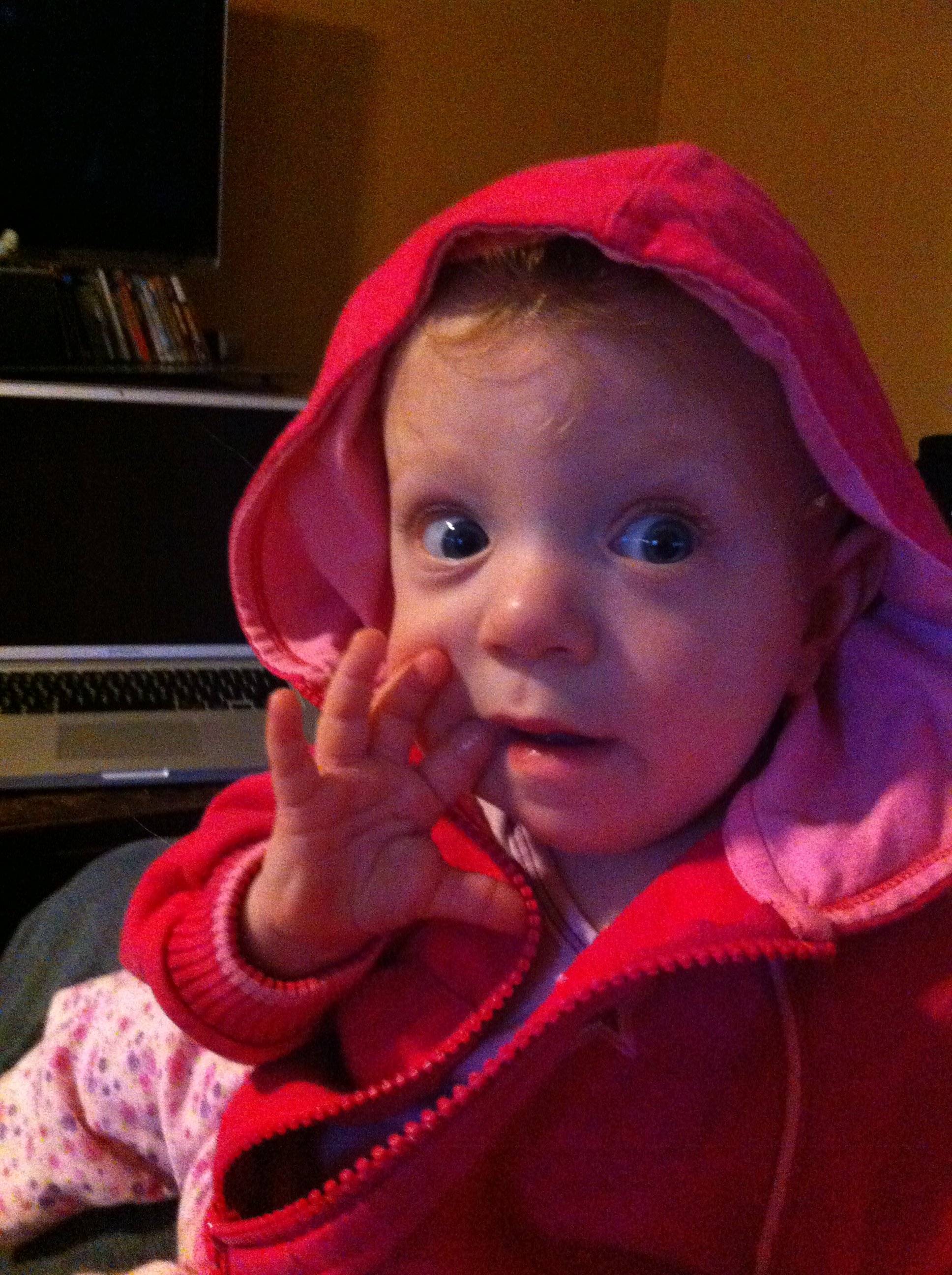 A year ago, today, I was feeling kind of crappy.  I had been feeling crappy for awhile.  I had this weird shooting pain through my back that was so bad it shot down my arm.  I was swollen.  Teaching freshmen after your doctor tells you to keep it cool and keep your feet up a lot is not the easiest thing in the world.  I was so tired.  I just felt crummy.  I looked up my symptoms and it pointed to a gall bladder issue.  So I called up my baby doc and she said to call up my regular doc and I did.  I went in.  She took my BP (no major spikes…just a little higher than normal) and set me up for an appt for an ultrasound on my gall bladder.  I would not make it to that appointment.

On November 20, 2012, I went to see Lincoln with my sister and my dad for his birthday.  Before that we had a fabulous breakfast at Patachou.  About halfway through the movie the pain got worse.  By the end of the movie I couldn’t stop twisting and turning in my seat.  The drive home was even worse.  I didn’t think the pain COULD get worse than it was and it continued to do so.  I tried taking a bath.  I couldn’t eat anything for the rest of the day.  I felt so horrible.  No position felt ok.  I had never felt like that in my life.  Finally Andrew called the doctor after hours and he told me to come in.  That drive to the hospital felt SO long.  I remember thinking, “OMG, when I’m in labor this is going to be the worst drive ever!  Why did we pick a hospital so far?!”  Well, I wouldn’t ever go into labor.

We got to the hospital and got me checked in and got me morphine (which was so amazing).  Then the doctor came in to tell me that just before 26 weeks gestation (not even into the 3rd trimester) I had to have the baby that night.  Oh, and actually in about 30 minutes.  Any questions?  WHAT?!  He said I had severe pre-eclampsia and HELLP Syndrome and the pain I felt was my liver and my platelets had dropped so low I would need a transfusion.  He said that I would have a stroke or start seizing very soon if they didn’t deliver her.  But the baby was doing ok…so far.  Her heart rate was fine.  I knew that babies this young COULD survive, but…eeeek.  I was so out of it I couldn’t really dwell on what was happening.  In a very short time they had me prepped for surgery and waiting for my blood.  When I was rolled into the operating room I heard Bruce Springteen’s Dancing in the Dark, and I imagined Courtney Cox dancing on stage with Bruce, and was amused, (I was very glad that my surgeons liked Bruce – for some reason) and then I went to sleep.

I woke up and remember very little about the next few days.  They had me on magnesium.  I guess my blood pressure wasn’t stable for awhile.  For those of you who have not had the pleasure of being on magnesium, let me explain to you how it feels.  In your head, you are slow.  In your body, you are on fire.  I was in a room with the temp turned almost as low as it would go and was burning up.  Poor Andrew was shivering in the corner with a blanket and I was like…trying to tear off any cloth near me.  I should pause now and point out that I can’t imagine Andrew’s view of all of this.  I still can’t.  I am grateful to have been completely out of it during this whole process.  He had to deal with the initial chaos clear-headed.  Ugh.  So, continuing on…I won’t get into the gross details of the next couple of days, but it was gross.  But it is all a blur between the painkillers and the magnesium.  I don’t actually remember how long I was there.  I barely remember seeing Coraline for the first time.

But I kind of remember…

They rolled me up in a wheelchair.  Standing to wash my hands for two minutes hurt.  But I did it.  And then I got into the farthest room in the NICU.  It was huge, with this one little isolette with a light and it was covered with a blanket.  And I went over to the side of it and looked at her and see looked SO broken.  It was both amazing and heartbreaking at the same time.  She was completely translucent.  She was red and you could see through her skin completely.  She was bald.  Her little fingers looked like ET’s.  I was afraid to touch her.  She was not supposed to live like this.  However, as soon as I started meeting the nurses in the NICU I felt immediately better.  They were so on top of it.  They answered every little question I had and told me to ask more.  They were never annoyed (or they hid it very well) and took such good care of her. She was 1 lb 1 oz when she was born, and dropped a tad bit before she started to gain.  It’s hard to imagine how small that is.  She was about the length of a Barbie doll and looked a lot like a miniature 80 year old body builder after a competition.  You could see every little muscle through her thin skin.

But she grew, and grew, and we were lucky with very little complications in the hospital.  She never got sick.  She just grew and got healthier.  She is now a crazy 14 1/2 pound mobile insane-o pants.  She crawls EVERYWHERE and pulls herself up to do things like:  play with the DVD player, knock glasses off coffee tables, rip up ANY paper she can find.  She is a baby on a mission. Coraline, just under 1 month old, sporting her support for Santa. We are both exhausted and delighted by our little against-the-odds baby.  She is truly amazing.  Every time a diaper change devolves into a WWE wrestling match I feel like I need to remind myself what it was like to change her diaper a year ago, something that seemed like it required tweezers.

Well, we are on RSV lockdown for the rest of the winter.  I am attempting to plan a late spring early summer trip to somewhere warm.  I love planning trips.

I am currently supposed to go back to work in March at IPS but unless I get a nanny it doesn’t seem like that can really happen.  A nanny is not financially responsible for someone who is teaching K-12.  That’s really just kind of silly.  So I’m really enjoying my position at School on Wheels.  I’ll stay there for now.  I’ve had enough to keep paying my student loans and my car payment.  We’re good.  I do miss teaching though.  Every once in awhile I see something online that would be really cool to use in the classroom and I get a little sad.  But then I read Facebook posts about being behind on lesson planning and grading and SLOs and TLOs and entering grades and I’m just like, “BIG sigh”.

Coraline has her one year appt on Friday with the doc and then an appt in January with her GI doc.  Past that we are looking pretty good.  We are supposed to call in January to make a spring appointment with developmental peds.  I think pulmonology and opthamology also want to see her later next year but we have no appointments currently.  Our immediate goal is to stay healthy, all of us.  I’ve never used so much soap and sanitizer in my life.  I’m that person that grabs a Lysol wipe at the grocery store and slathers the cart, and then sanitize my hands again AFTER sanitizing the cart.  It’s obscene.  I hate what I’ve become.  Erg…and I just remembered…I need to get my flu shot.  I suppose I will do that on Friday.  Boo.

Try to enjoy the holidays!  Coraline won’t be able to come with my to my family’s events because there are too many people and too many kids.  But we’ll hopefully be able to enjoy some time over at Andrew’s family’s place, so long as everyone stays healthy.  And then next year…we’re gonna celebrate like real people.

One more thing…I can’t thank enough the people who have made this year move smoothly:  family, friends, nurses, doctors, co-workers, etc.  You all know who you are.  We both appreciate it so much.