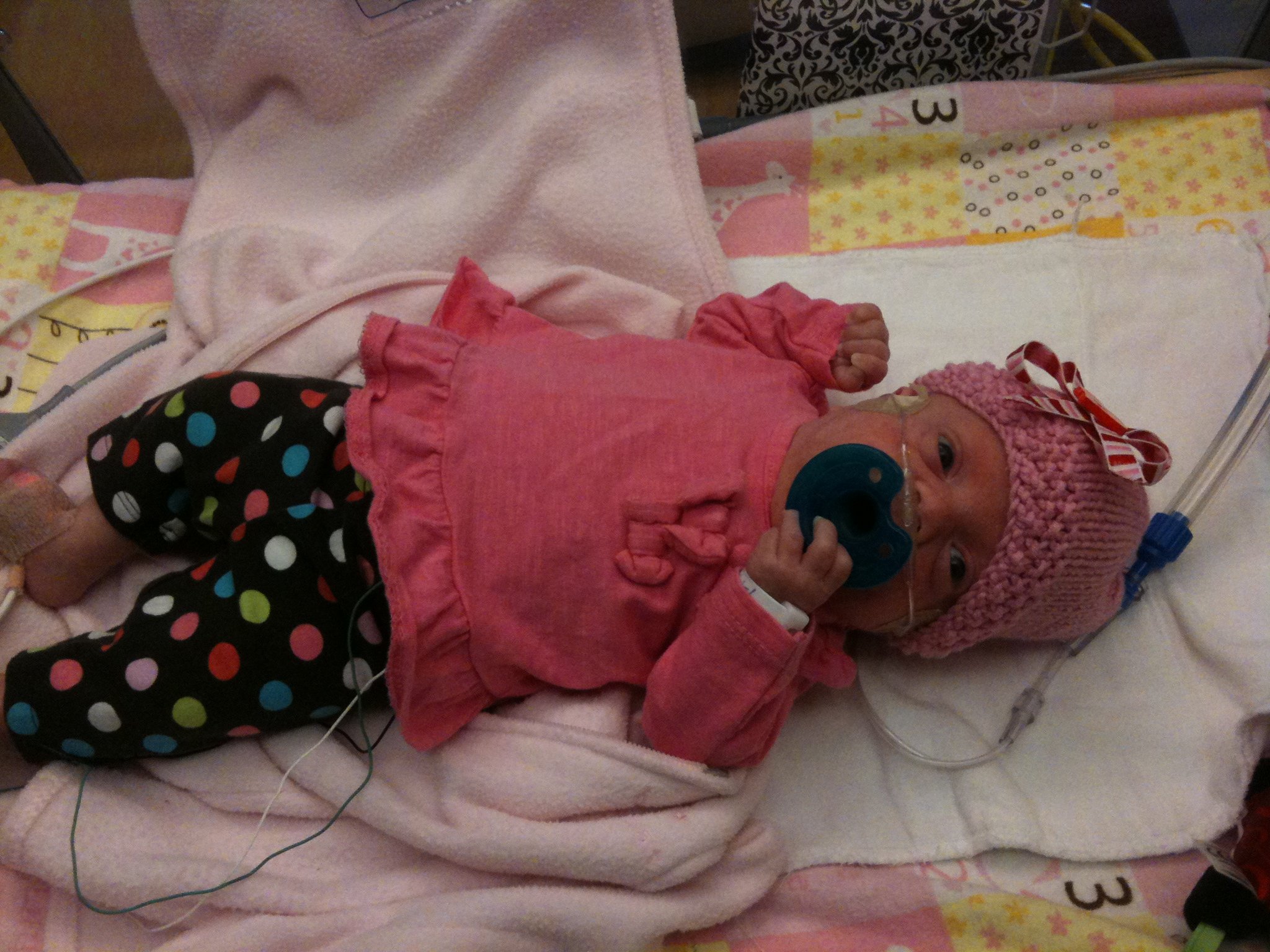 So the last couple days have been a bit of a bummer for me.  On Saturday I had kind of a nasty throat.  If you could see the state that our house is in right now you might understand why I thought THAT might be to blame.  I haven’t been sick since MAY.  May, you guys!  That is the longest stretch ever.  So I was feeling a little invincible and thought, “No…I can’t be sick!  That doesn’t happen to me anymore.”  And my glands weren’t swollen or anything.  So I went to the hospital.  I felt fine at the hospital…just a little gross in the throat still, but just to be safe I tried not to touch the baby too much.  That is hard to do cause she’s so darn cute.  So I really tried to avoid her hands/face.  I didn’t hold her.  I did, however, help to give her a bath and put her in a super cute new newborn outfit. So I came home to Andrew working on the bathroom with the help of a Mr. Andrew Woody.  His new wife, my friend Julia, was just finished painting in the baby’s room.  What a great thing to come home to!  As time wore on, I started a feel a little wonky.  By the time Andy and Julia left, a few hours later, I was laying in a pile of blankets on the couch.  I had Andrew get the thermometer and I had a temp of almost 102!  WHAT?!  Out of nowhere.  Andrew was like, “Wow…your face is RED.”  I could tell.

Andrew immediately went out to get me some Zicam upon the suggestion of Julia and I have been taking them every three hours since.  The fever lasted all of three hours.  I am now down to a tickle in my throat, a cough every now and then, and a sniffly nose.  So I didn’t go to the hospital on Sunday at all.  Andrew went and had a lovely time with baby and Grandma.

I talked to the nurse practitioner this morning and she suggested that I not come in till I’m 100%.  I totally can go along with that but it’s REALLY SAD!  100% could take a week!  At least!  So…that is bumming me out.  I am trying to get Andrew to go up every day so long as he stays healthy.

Of course Andrew is busy with other things like…helping to remodel the bathroom! Andrew Smash:

Which means that not only am I banished from the hospital…I am also kind of banished from my house.  As we have no shower or toilet to use.  So another friend, Brian, is SO nice to let us stay with him.  It’s been great.  I woke up to a K-Cup coffee and homemade zucchini bread this morning!  What a host.

She is healthy!  Yay!

They weaned her down to 2 liters of oxygen on Sunday, but she dipped down into bad saturation levels quite a bit so they turned her back up to 3.  She’s not quite ready.  Next time they go down I believe they are going to try 2.5 to see how that goes.

She is getting really big!  As of last night she weighed 6 lbs 1 oz.  She gained 3 ounces in one night.  So they decided to take her to 24 cal feedings.  They also had to increase her volume since she’s gaining weight and she’s up to 49 mL each feeding.  We’re finally starting to make a dent in the milk stock we have in the freezer at the hospital.  The nurse practitioner also said that she is being taken off the human milk fortifier that they add to her milk, and will be using Neosure in it instead, which is another move forward.  If only her lungs were growing as much as the rest of her.

She has a vibrating bouncy chair that she has been in twice.  We have been told that she is into it.

I think that’s about it.

Thanks to everyone who has helped out this week!  Andy, Julia, Brian B., Brian S., Stephen and to our lovely neighbors who are putting up with our mess and noise.  They may not like it, but they haven’t called the police or code enforcement on us yet!  Win!