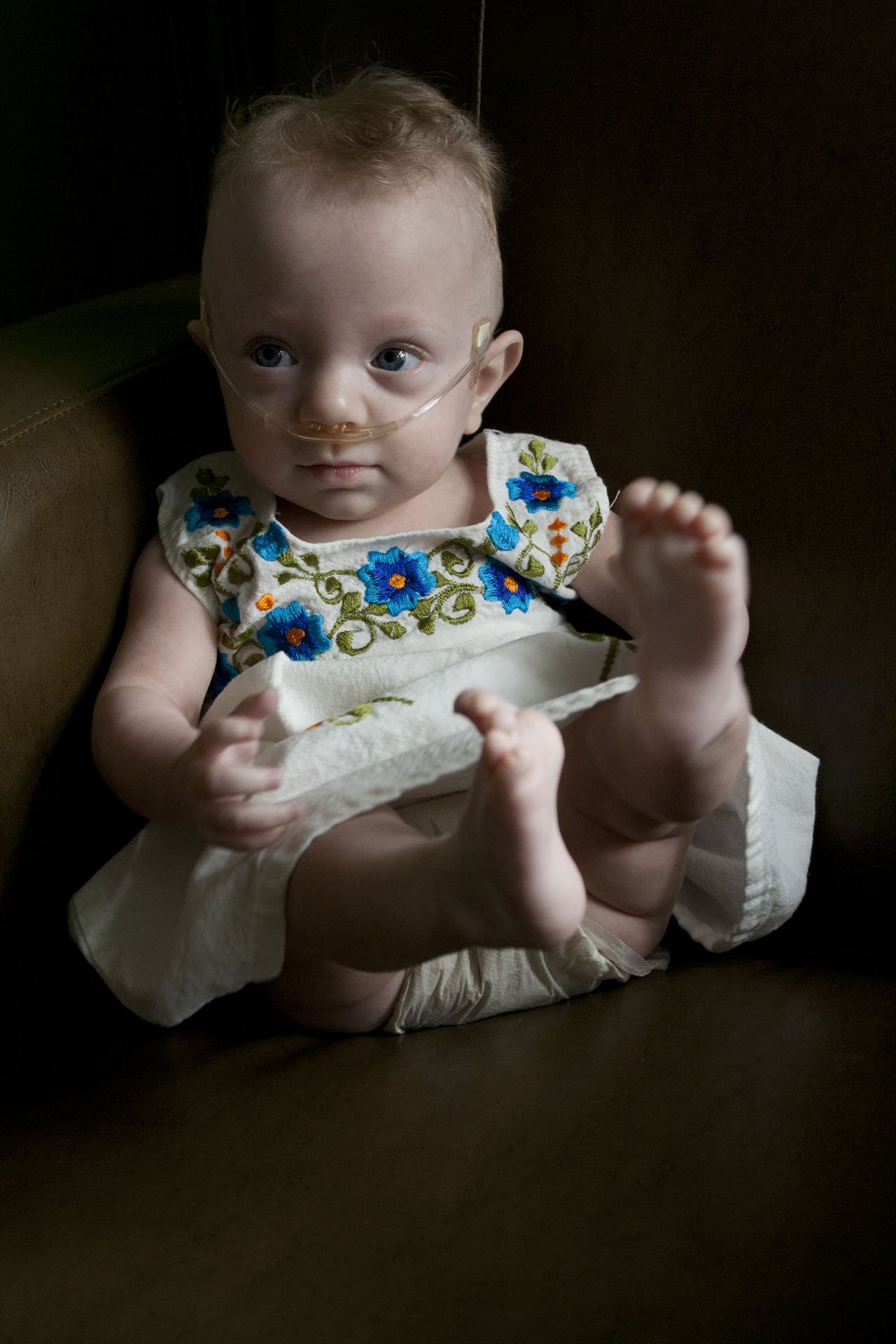 This is going to be the last of the weekly updates, unless something happens in the course of Coraline’s progress.  But…she’s doing so well that each Sunday you should really just assume she is kicking butt and getting bigger and better.  I will actually keep posting, but it will be every 2-3 weeks rather than weekly.

So, for this week, we have great news from the doctors!

Pediatrician:  She weighs 12lb 9-11oz (we got two different weights on the same day.  Soooo…yeah).  She is about 25 in long.  Her head is 16 in.  (I think). She is where she needs to be developmentally for her adjusted age.  She is almost on the growth curve for her actual birth date…not quite, but she’s gaining on it.  I was convinced that she was anemic because we haven’t been able to get her to keep her vitamins down anymore.  She completely throws up the poly vi-sol every single time she takes it.  So now she is on Vitamin D drops and iron drops.  It’s not the iron that makes the poly-vi-sol so gross, it turns out.  It doesn’t help, but they (I don’t know who “they” are) say the B vitamins are the real culprit.  So…anyway, she got a blood test and she is NOT anemic.  At all.  So happy about that.  She got a little finger prick, didn’t cry at all, and tried to suck the bandaid off her finger.  So gross.

GI Doc: This was just a follow up appt. to make sure that her reflux was getting better and she was still gaining weight.  The doctor seemed happy with her progress and we are very happy that the Prevacid has helped so much.  He wrote a new scrip for Solutabs instead of the suspended meds in liquid.  So we’ll see how that goes.  You know what’s stupid?  How expensive medicine is.  Ugh.

Cardiologist:  When we got there they told us she would be getting an Echo.  She hasn’t had one of those since she was VERY young in the NICU.  So I was a little worried about her being difficult.  An echo-cardiogram kind of looks like an ultrasound.  They have a little wand they put gel on and rub it over the chest and you can watch the heart pumping.  There are all these colors and it’s kind trippy, man.  Coraline did great while they used to echo to find her PDA. Coraline assisting in her own echo-cardiogram. I’m sure the tech appreciated it.

Most preemies grow out of their PDA without surgical intervention, eventually.  We are lucky that the indocin helped to close it a little when she was in the NICU so she didn’t need ligation surgery.  So then they tried to take her blood pressure and almost amputated her poor leg with that cuff.  They finally gave up and then we waited for the doctor, and waited, and waited…over a half hour.  I’m really glad she ate right before we left  home that day.  But the doctor came in and listened to her heart and said, “Well, the PDA is closed!”  Yay!  I was so nervous about being late to one of the first meetings of my new job that I was not as excited as I should have been.  One less specialist….not that I didn’t like our cardiologist.  What is a PDA?  I thought you might ask.  Wikipedia will help you.

We have stopped our weekly weight checks.  So we don’t have another doc appt until September 27.  And that’s the biggie – pulmonology.  Wah Wah.

Other new Coraline tricks and activities:

She is still Lil Miss Pukey Pants.  We just cross our fingers that she won’t have a meltdown cry fest, won’t laugh too hard, or get the hiccups right after she’s eaten because her gag reflux is ridic.  And she throws up.  A lot.

BUT…she’s doing way better on eating, so I’m less concerned about her dying from dehydration when she does that.

She is starting to get into the phase where she is more whiny being held by people who aren’t mom, dad, or people who are here pretty regularly.  She’s just a little Nervous Nelly. Quite the little snuggler with Mom or Dad.

She wants her cannula in her mouth.  Then when she gets it there she’s like, “ACK!  This thing is in my mouth!” with these scared wide eyes.  She’s so weird.

We went to the Feast of Lanterns yesterday with the fam to just hang out for Coraline’s Uncle Stephen’s bday.  She got to see her cousin, Anna. She cried every time anyone else wanted to hold her…and threw up.  She’s a real party pooper.  Granted, she really needed to take a nap.

Her arms are getting stronger.  She’s holding herself up on her stomach a little more and for longer.  She is even starting to play with toys sometimes while lying on her stomach.  Crawling is just around the corner!  Better get the baby-proofing outlet plugs sorted out.

We had to give her swing back to the original owner because she was VERY close to hopping right out of it onto her head on more than one occasion.  It was kind of sad, but I’m not going to miss those stupid songs it played.  We’ve actually gotten rid of quite a few things from her early times and the LR is once again becoming not so much the baby room anymore.  I would like to buy a little rug so that we can play a little easier on the floor.  I’m just nervous about what the cat will do to it.  He’s so bad.

The dog is continuing to become more tolerant of her.  He still does not like her flailing, or being hit with her cannula which she likes to whip around, like she’s trying to double-dutch.  He does like to lie on her blankets and plays with her clothes.  Not sure if that’s a good or bad thing. We are at kind of a stand still.  I bought a new kitchen mat and felt REALLY productive.  So that might tell you something about how much we’re getting done.  I would personally love to spend some time doing a few things that would spruce it up a bit in here.  Maybe sometime before the next post.  I would like to:

Now…one of our friends has moved across the street into a house that is a fixer upper.  We are so excited; and I feel like working on our house might not be as fun as helping her out.  (sigh)

And now for something completely different…

One of Coraline’s best buddies, Nathan, bought this little outfit in Mexico when he found out she was going to be a girl.  And guess what!  It finally fits her! I had a request to attempt to part her hair on the side after her bath this morning. It turned out not so great.