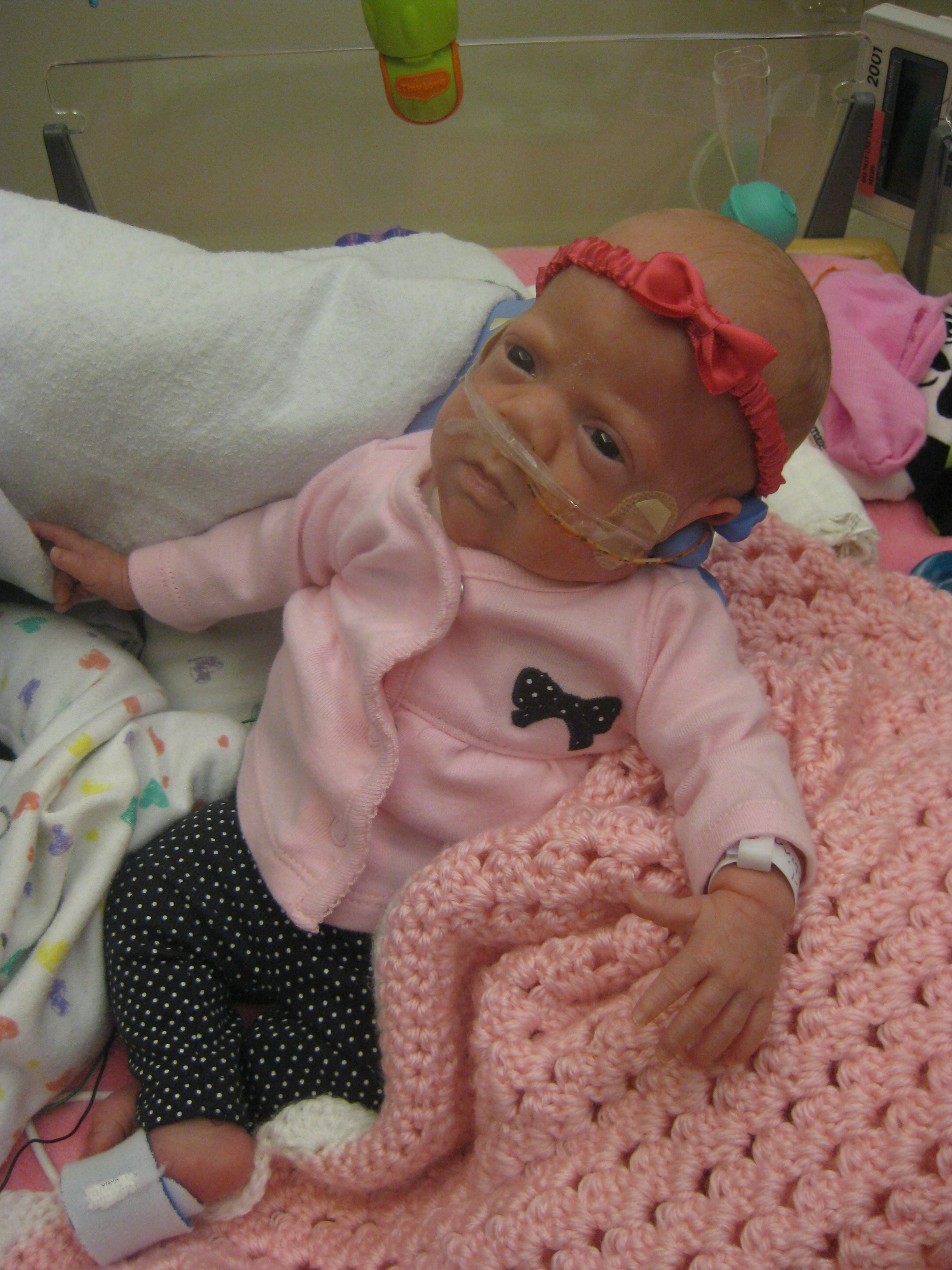 Well, life has been getting crazy for little Coraline lately.  She’s had all sort of big and exciting changes over the last week or two: She got to start wearing clothes.

She got a crib and moved out of that massive isolette.  Her room looks so much bigger now.

She is off the nasal IMV and is on a much more convenient and comfortable vapotherm.  She weaned down to it so well from the C-Pap they hardly had her on it at all.  She seems to have no problem remembering to breathe.  She still does, from time to time, refuse to breathe.  Her face turns all red and she looks super angry.  This could be from reflux (which almost all preemies have) or gas pains or just a really full belly.  She usually gets worse with this at the end of food and right afterwards.

She will probably learn to swallow this week or next!  She has to get down to 2 liters of O2 on the vapotherm for her to try feeding.  Right now she is on 5 liters.  She started on 6.  So she’s on her way.  This is just one more step to getting her home sooner.

Today she weighs 4 lbs 9 oz!  She is growing so much and so quickly they took her down on her higher calorie human milk fortifier from 30 to 27 cal.  If she keeps going at this rate, she will be the size of a normal newborn on her due date!  Well, a small normal newborn.

She got her splint removed.  She had on an ankle splint because her little right foot was sticking out all wonky like.  It seemed to have worked cause she turns it in the way she’s supposed to.  I have the same problem.  I wonder if a PT/OT had looked at my ankle when I was born if I could have avoided years of grief from mean classmates calling me “penguin”.

Her head is rounding out!  Many preemies end up with what is called “toaster head”.  I’m pretty sure this is the official term for it.  It happens because they like laying on their bellies so much more, and their heads are turned on either side, but they often don’t lie on their back to get it rounded out.  And well…it’s flat like a toaster.  She was starting to get a bit of toaster head, but her OT Pat made her a head-positioner that she seems to actually like…and it keeps her head at mid-line when she’s on her back.  And it’s working!  She’s got a pretty good rounded head. Andrew, with the help of a VERY nice friend – John Schlafer, is tearing out the concrete sink in the basement, installing a new sink that won’t overflow every time we do laundry.  And has installed a water softener – something we have never had in our house (which we have lived in now for 8 years!).

The baby’s room is starting to come together.  My goal is to get some closet painted tonight and maybe some closet doors painted tomorrow.  We are going to have quite the project upstairs as a lot of the stuff from the baby’s room has migrated up to the office.  We’re just going to avoid it till we can get her stuff sorted out.  One thing at a time.

Here is some of the work done:

More than half of sink gone Sink finally gone!  All the concrete is on the back parking pad now.  The neighbors will love us.  We’re looking classy.