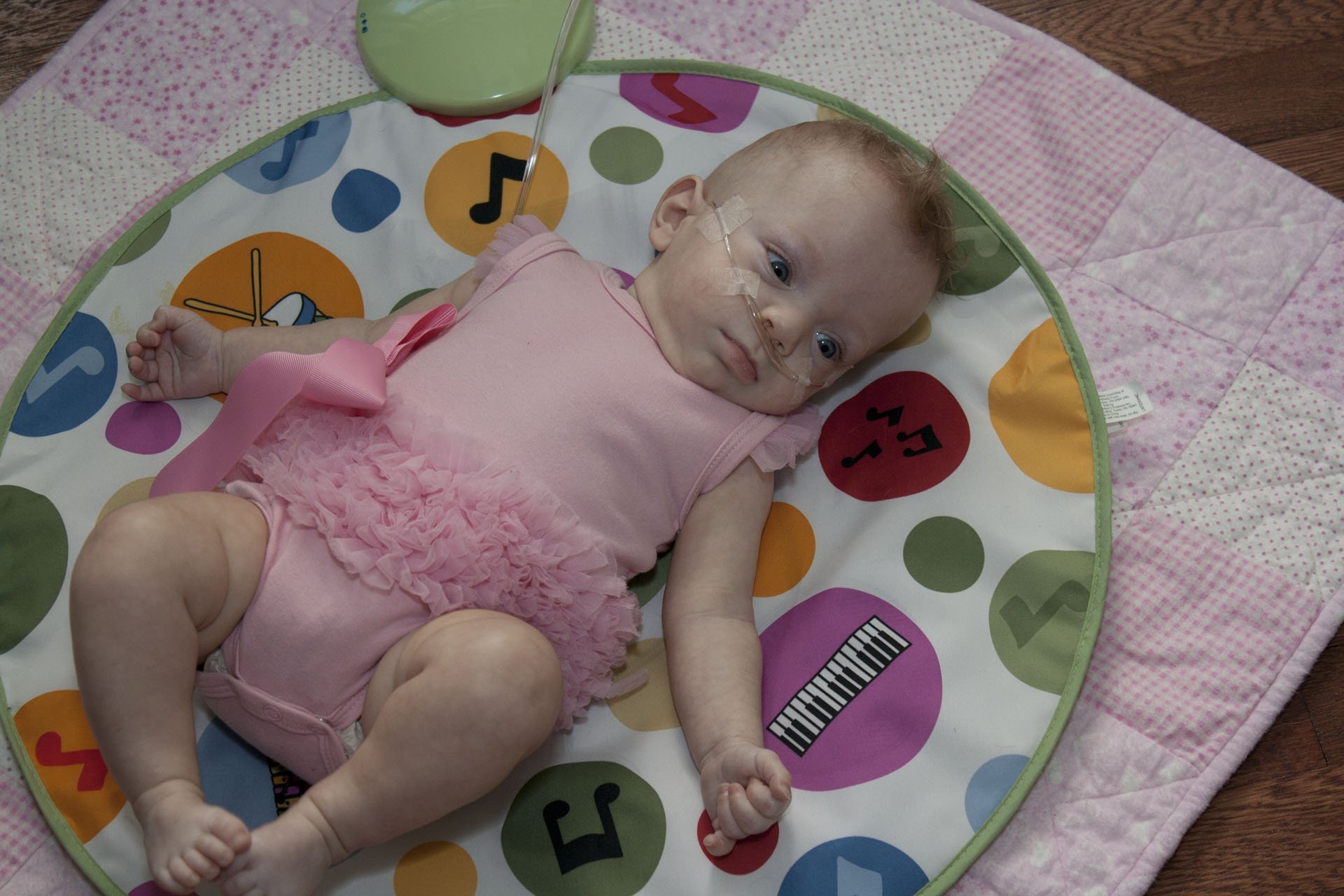 So, what we learned from the bronchoscope:  very little.  In fact, the night of said procedure I was talking to Andrew and just wanted to make sure that I wasn’t missing anything.

“So, it’s not just me, we didn’t really learn anything today, right?  And we’re not doing anything different, right?”

Coraline has some redness due to her acid reflux.  We’re hoping the Prevacid starts to allow her to heal some now.  She also has these tiny little nodules that are not uncommon in babies that have been on a vent for so long.  Both issues should resolve themselves.

The process of getting the procedure done went smoothly and Coraline did great.  I do hear that she was not the happiest camper while they were doing it, but she seemed to get over it as soon as she got back into the room with us.  She had no side effects except maybe a little coughier than normal for a day.  No biggie. Coraline in her super adorable surgery gown garb. She was a happy camper at Riley.

We have our next pulmonologist appointment in the end of September.  So no changes till then, at least.  (sigh)

Although, I will say that I am glad it’s not a situation where she needs to have surgery or something else really bad.  Every once in awhile I see stories about kids who are way worse off.  Some who have trachs, some who got NEC and now have long-term damage, and some who never make it home.  So I try to remind myself that the inconvenience of an oxygen line is just that, an inconvenience.

We’re trying out solids!  Coraline has been taking rice cereal in her bottles for awhile to try and keep some of her milk down with her reflux.  It honestly doesn’t really help.  So we’re graduating to oat cereal with a spoon!  We tried for the first time yesterday and she seemed pretty into it!  She at least didn’t spit out all of it.  So better than I expected. She’s all, “What is that in your hand? What is all this nonsense about?” “So I just put this thing in my mouth? AWESOME! I love putting things in my mouth!”

She is not taking as much in a bottle as I would like her to still, but we’re on our way up.  Once again, bronchoscopy day threw her off schedule and it’s been a struggle getting back.  She does NOT do well off schedule.

She is a rolling over fool.  Unfortunately this means that she stays on her belly for like…2 minutes when we have tummy time and then she just rolls herself over.  It’s frustrating because her arms are not super strong and she just  has no desire to get them to where they need to be for crawling. “Look how I can hold myself up!” Andrew suggested we try her using her boppy more for support.  This is definitely amusing, but doesn’t really help the issue.  She sort of flops herself over the thing till she’s in a super awkward position on her side…and just lays there. She is becoming a lazy thumbsucker.  She isn’t really committed to it though.  She still cares very little for a pacifier.

We’re going to have to get her sorted out with sleeping in a crib soon.  Her rock and play is starting to annoy her and she tries to climb out.

The reflux has gotten way better but she is still puking a bit, especially when she works herself up into a tizzy.

The dog…still her favorite thing in the house.  But I DID manage to make her laugh on my own once this week.  It was the first time without the dog’s help.

Yay for me!  I got a part-time evening job so that I can continue to stay home during the day but not be a complete drag on the family finances.  I will be working at School on Wheels, as a program coordinator.  It’s a non-profit that works to tutor homeless students.  I’ll be working at the Dayspring Center downtown.  So excited! It’s a great organization and I’m really happy to be able to pay my student loans and car payments.

Also…and this is completely off-topic, but I’m so excited about it…I got a summons for jury duty!  FINALLY!  So the day after my last day of training for my new job I will potentially be on a jury.

And for your viewing pleasure…some cute pictures.  This outfit came from one of her nurses in the NICU and it’s fitting her perfectly right now so we HAD to put it on her. Hoping Dad saves her from this stupid camera. No such luck, kid. With her dog friend